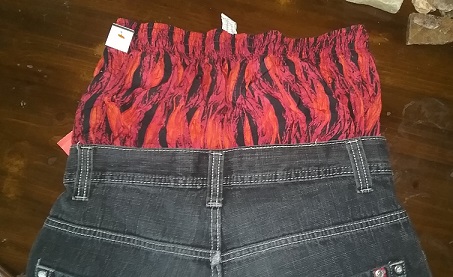 BANNER ELK, N.C. – April 2, 2018 – PRLog — Elk ~ Saggy pants have been around for a long, long time and the issue of youngsters wearing baggy pants with underwear exposed seems to be more of an issue with the people of Timmonsville, SC than the war on drugs, school safety and/or gun control.  According to a story reported on July 6, 2016 by Kristy Steward of WLOS, ABC Channel 13 News, Mary Bines, Town Administrator for the Town Council of Timmonsville, South Carolina reported that the town council voted 5-1 to enact a new town ordinance that outlawed wearing of sagging pants, trousers or shorts that intentionally display a person’s underwear or where ‘one’s behind is exposed’.  Among other things the new ordinance states that ‘male persons’ (no mention of females) may not (a) Engage in public nudity; (b) display pornographic material such that others are unwantingly exposed to the same or that minors are able to view the same; (c) display the flesh of one’s rear-end, behind, or backside during stationary or movement within the city limits; (d) wear pants, trousers, or shorts such that the known undergarments are intentional [sic] displayed/exposed to the public.  Persons who violate the ordinance receive initial warnings and then, citations.  A third and subsequent offenses carry fines ranging from $100 to $600.

It’s taken about 2 years, but jump ahead in time to February 15, 2018 when SC House Bill 4957 was introduced by SC State Representative, Hon. Joe Jefferson, Democrat from Berkeley County, along with other legislators in response to complaints by residents of the town of Timmonsville, SC.  Consequently House Bill 4957 was passed by the Democrat-controlled legislature and became law in early February 2018.

In recent years multi-cultural youngsters of diverse ethnic and racial backgrounds have undertaken a style of dressing and wearing clothing, e.g., underwear and pants (Jeans) in combination, wherein the underwear are worn at a level approximately 4 inches above the  top of the pant garment resulting in the underwear being highly visible and subject to falling down below the wearer’s Ilium, or hips, with the pant garment being worn at or below the midline of the pelvis, thus affording potential exposure of the buttocks of the wearer as a result of slippage of the underwear garment due to downward stress imparted by the lower pant garment. This style is known by other nomenclature, e.g., ‘Saggin’ Pants’, ‘skateboard’ and ‘south pole baggy’.  Some members of law enforcement have stated the general belief that this cultural trend is associated with drug trafficking, illegal gang activity and other criminal behavior, and started among members of street gangs in major metropolitan centers, e.g., Los Angeles, Detroit, Chicago, Miami, New York, Dallas, all of which have large demographic populations of black males between the ages of 12 years to 25 years with BLS reporting unemployment among this demographic being as high as 8.3% of the total population.

This act to regulate personal expression of voice and choice, allowed under Article 1 of the US Constitution, by local and state governments is viewed by some as a possible violation of Constitutional Rights to Freedom of Speech/expression.  Despite that prospect the trend to outlaw the way people wear clothing is now extending to private businesses operating before the general public, such as McDonalds restaurants in the State of Texas. In other parts of the USA young black and white people, for no other reason than wearing clothes in a manner disliked by older (usually White) residents and (white) police officers, are being arrested and jailed for non-compliance with new laws and town ordinances that are being passed without referenda, laws being passed (literally) in the middle of the night behind closed doors, out of public view and without public comment, laws that are clearly discriminatory in the eyes of most people.

In an effort to find ‘compromise’ and ‘an amicable solution’ to this hotly-debated issue, two design engineers from North Carolina collaborated to come up with a new type of garment that they believe satisfies both sides of the issue:  Baggy-fashion for young people, and a feature that can be used by older people who can also wear the new ‘Fashion Garments’… an absorptive
appliance to accommodate older citizens who suffer from incontinence.  The team has filed a formal application for a US Patent on a new garment, entitled, “Legally Compliant Fashion Garment and Method”,  branded the new product as “4959’s”, and has established an online shop to take orders for the new garments at www.4959.store where other fashion items, such as purses, watches, ‘4959’s’ and other assorted accessories are offered at discount prices.

In an interview with the inventors, Joyce Mann, CEO of RMANNCO, Inc. of Lenoir, NC, and Dr. Joseph Resnick of Pittsburgh, PA, Ms. Mann was eager to point out that the technology is “designed to offer compromise and resolution to the issues of concern in both younger and older citizens”.  Ms. Mann, whose demeanor is very soft and quiet, almost ‘spiritual’, stressed that the new garments are intended to offer compromise and not intended to offend anyone or any age group nor encourage discourse between 4959 wearers and law enforcement officials.

Dr. Resnick, on the other hand, who is somewhat of a “Constitutional Conservative” and considered by some to be a ‘Hawk’ because of his work in designing hardware and systems for military and law enforcement applications, holds a ‘slightly different point of view’.  Although Dr. Resnick shares consensus with Ms. Mann, he stated, “The obvious social trend initiated in Timmonsville, SC and subsequently legitimated in SC House Bill 4957, constitutes what many would perceive to be overt discrimination against a particular demographic, in this case younger, black males between the ages of 12 years to 25 years”. Resnick continued, stating, “I can understand that clothing trends can be distasteful and even down-right offensive in some cases. Some people are offended by chubby-people wearing a Bikini, or skinny people going nude on the beach.  So, similarly to the case in Timmonsville, someone should have attempted to find some ‘middle-ground’ with the situation, instead of attempting to ‘dictate through legislation cultural pathways and clothing trends exhibited by today’s youth’.  You can’t legislate morality and to attempt to do that, as reflected in SC HB 4957, is not only unjust, unfair, and discriminatory, but also probably unconstitutional as well.  In view of these facts we have invented/designed a new class of garment which we have named, “Legally-Compliant Fashion Garment/Method”, that concerns patentable subject matter, is new and useful and is not obvious to persons of reasonable skill in the art, and serves all age groups”.
For additional information contact Joyce Mann by email at Joy@RMANNCO.Com

LogoCharts : LogoCharts provides millions of hd logos and symobls png images for free download. All png images with transparent background can be used in your personal non-commercial or educational projects.