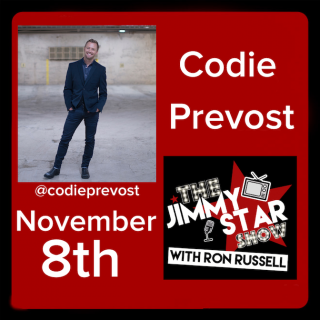 Codie Prevost on The Jimmy Star Show With Ron Russell

NEW YORK – Oct. 29, 2017 – PRLog — Codie Prevost will be a featured guest on the Jimmy Star Show with Ron Russell live radio/tv show hosted by king of cool Jimmy Star along with cool man about town Ron Russell to discuss hsi music, his career and the entertainment industries at large. The Jimmy Star Show with Ron Russell is tv/radio’s coolest hit show, featuring the coolest in music, entertainment, fashion and pop culture, all from a fun industry insider perspective in a completely live, unedited fast-paced two-hour conversational format.

Since starting his career he has shared the stage with some of country music’s top performers including Garth Brooks, Florida Georgia Line, Joe Nichols, Jason Aldean, Big & Rich, and Neal McCoy. He’s toured internationally having performed tours in France, U.S.A., and his most recent tours to Australia, which included performances at the Tamworth Country Music Festival, Plantation Music Festival, and the Gympie Music Muster.

“You Won’t Sleep Tonight” is the lead off single from the upcoming album.

The Jimmy Star Show is pleased to showcase the expertise and talent of Codie Prevost and all anticipate a fun and informative time talking with him about his career and the entertainment industries at large. Join king of cool Jimmy Star, and cool man about town Ron Russell as they have a playful and sometimes wild time with the talented featured guest!

To hear/see Codie Prevost on the Jimmy Star Show with wfv Ron Russell tune in to w4cy radio on Wednesday November 8th, 2017 from 3-5 pm et and 12-2 pm pt online at www.w4cy.com  from anywhere in the world!

The Jimmy Star Show may be found at http://www.jimmystarshow.com

The official site for w4cy radio may be found at http://www.w4cy.com

The Jimmy Star Show is syndicated and can be heard on the following radio stations:

You Don’t Have to Go Up North To Celebrate National Trails Day — Michigan...