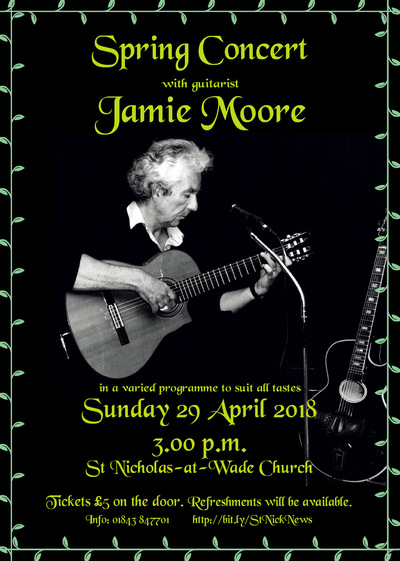 First is a guitar concert on Sunday April 29 at 3pm, featuring local favourite Jamie Moore. Jamie is an accomplished guitarist who has performed throughout the world in settings including television, radio, West End theatre, touring stage productions, summer seasons, recording studios, concert halls and cabaret. His programme will include original guitar pieces from his recordings, some familiar pieces by well-known classical guitar composers, a bit from Brazil, and a few favourite ‘standards’. His music covers a wide range of styles, from classical and jazz through to improvisation and musical theatre.

In June, regulars Thanet Light Orchestra return with an accessible programme of light music and popular classics, in aid of the church’s fabric fund.

Japanese music seems to be all the rage at present, with a recent series on BBC Radio 3 and Kings Place soon to stage “Noh Reimagined”. At St Nicholas-at-Wade too there will be a talk in July by Andrea Chance with Japanese music performed by former students of the Yehudi Menuhin School, in aid of the Kumamoto Earthquake relief efforts.

September sees a concert by Canterbury a capella quintet Quod Libet, singing songs from across the centuries, both solo and in close harmony.

The church is famous for its acoustics, refreshments and welcoming atmosphere. For almost all concerts, tickets are available in advance at St Nicholas post office or on the door, and entry is free to under-18s.

More concerts are planned. Detailed information on all events can be found at http://stnicholasatwade.org.uk/news.html