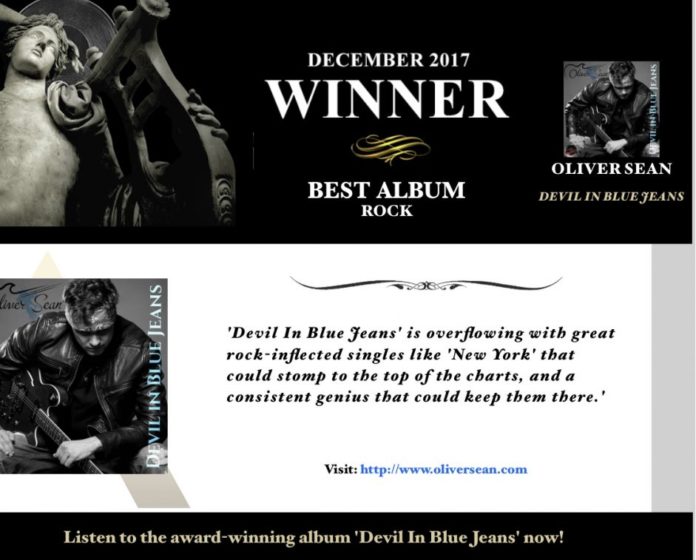 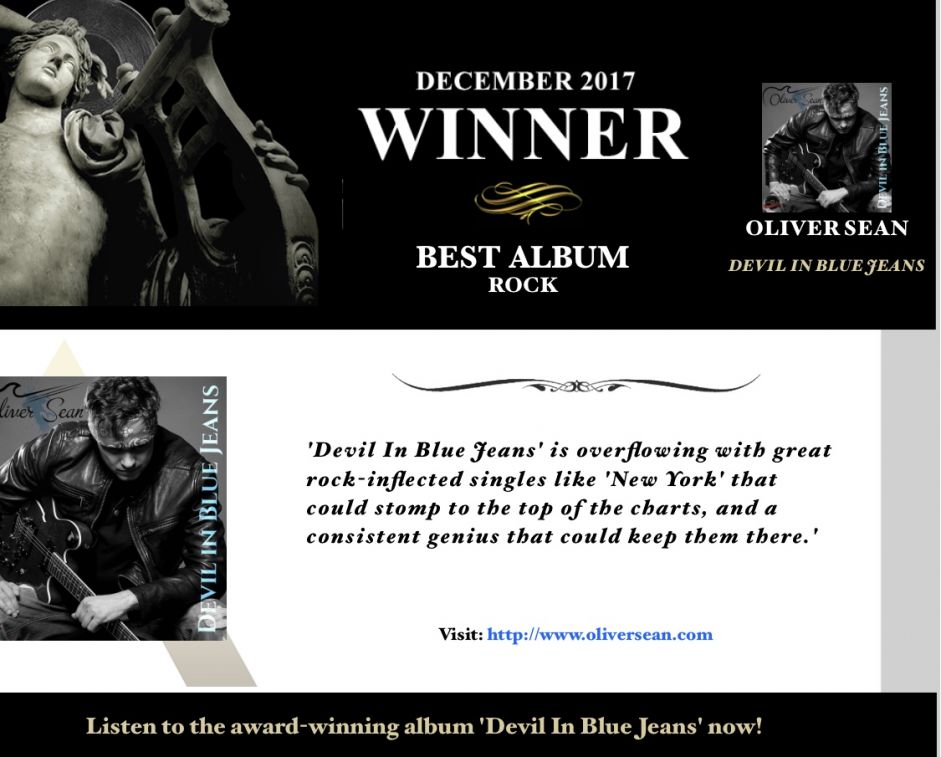 Devil in Blue Jeans was released on Indie label WOA International, part of the WOA Entertainment Group on 31st August and hit the iTunes Best Selling Pre Orders charts. Two singles from the album (New York and First Move) have been released, with both music videos hitting Vh1 International along with other major networks like 9XO and RTP International giving both singles extensive support. BBC Radio in the UK also picked up the song ‘Walk up and Kiss you’ for rotation on their networks in the UK. The WOA Entertainment Group also announced recently that this would be the third official single from this album and is scheduled to be released shortly with a music video.

“It is with great pleasure that we formally congratulate Oliver Sean on winning The Akademia Music Award for Best Rock Album for ‘Devil In Blue Jeans’ in the December 2017 Akademia Music Awards” said The Akademia Representative, “Devil in Blue Jeans is overflowing with great rock-inflected singles like ‘New York’ that could stomp to the top of the charts and a consistent genius that could keep them there”

The Akademia Award wfv for best rock album awarded to ‘Devil in Blue Jeans’ shows the support the album is receiving from the industry at different levels and the support Oliver Sean has from his ever-growing legion of fans.

“Awards like these are a huge support for Artists, especially Independent Artists who don’t have the monetary support of major labels and their influence at the major awards, which as usual go to manufactured acts every year”, said the Vh1 Top 10 Artist Oliver Sean, “I have always maintained my Independent Musician status and my Indie Record label WOA International has done more than I could have asked for. The Akademia Award for best rock album along with all the other accolades from media and fan support this album has received keeps me inspired to keep going forward and do my best every time”

‘Devil in Blue Jeans’ can be streamed for free on Apple Music, Spotify and is available for download across all major stores such as, iTunes and Amazon. Fans can also buy a hard copy of the CD at stores and a signed CD directly from www.oliversean.com

Formed in 1998 by MTV Europe Music Awards Nominee and International Musician and Filmmaker Oliver Sean, W.O.A Entertainment is a global entertainment company that continues to lead the way when it comes to how music should be promoted. They are pioneering International Independent music in India & Dubai and are synonymous with the region. W.O.A Entertainment Group has the enviable position of being the go to company for artists who want to break into the India and Dubai markets http://www.woaentertainment.co.uk