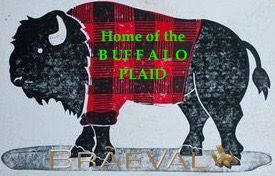 America’s Plaid ~ BUFFALO PLAID ? Learn the origins of this ubiquitous plaid and how it arrived in America…

Home of the Buf Pld

LITCHFIELD, Conn. – April 3, 2019 – PRLog — Buffalos Aren’t Plaid. So, How Did “Buffalo Plaid” Get Its Name? And Where Did This Americana Fashion Icon Come From?

For Starters, Here’s A Big Surprise: Its Origins Have Little To Do With America. Or Buffalos. Instead, Big Jock MacCluskey, A Scottish Highlander Who Came To America In The Late-1800s, Is The Key To Buffalo Plaid’s Mysteries.

Ever since Hollywood debuted its first cowboy shoot-’em-up, the ubiquitous buffalo plaid has symbolized the Wild West’s mano-a-mano hero. Marlboro Man wore it. So did Roy Rogers. Tom Mix, too. Everybody knows buffalo plaid was born in the USA.

But what if it wasn’t?

So, how did “buffalo” plaid get it’s name? And where did it come from? Until now, nobody knew. Big Jock MacCluskey, a Scottish Highlander who came to America in the late-1800s, is key to unraveling its mysteries.

But more about Big Jock, later. In the meantime, “Buffalo plaid,” tells Webster’s Dictionary is: “A plaid with large blocks formed by the intersection of two different-color yarns, typically red and black.”

Since Hollywood debuted its first cowboy-and-Indian shoot-’em-up, buffalo plaid has symbolized the Wild West’s mano-a-mano hero. Marlboro Man wore it. Roy Rogers, too. Everybody knows buffalo plaid was born in the USA. Buffalos, after all, are symbolic of America’s Wild West. Even Paul Bunyan’s shirt is buffalo plaid. Ditto Elmer Fudd’s ear-flapped “trapper” hat. Fudd’s duds from Italy? Proof is overwhelming:Buffalo plaid is all-American. Red, white and blue to the core.

Dead wrong. Surprisingly, its origins have zero to do with America. Or even buffalos. Instead, buffalo plaid is a Tartan that traces its legacy to 8th century Scotland. There, it ranks the oldest Tartan, a symbol of the most legendary of all Scottish clans, thanks to the near-mythic status of its warrior leader, Rob Roy MacGregor; a name that has inspired countless books and dozens of Hollywood movies.

Consensus is that Rob Roy MacGregor Tartan arrived in America after the Battle of the Little Big Horn in 1876; better known as “Custer’s Last Stand.” But buffalo plaid didn’t become a fashion craze until 40-years later, when a giant, mythological lumberjack named Paul Bunyan made his 1916 debut bow in a buffalo plaid shirt. Thanks to Bunyan’s muscled caricature and heroic exploits, buffalo plaid became symbolic of America’s rough and rugged, daredevil adventurers.

In the meantime, the answer to the first riddle – how Rob Roy MacGregor Tartan arrived in America – begins 275-years before Custer’s rout when England’s King James VI outlawed the MacGregor clan in 1603.

No ordinary clan, the MacGregors traced their pedigree to 8th century royalty. Hailed and feared, alike, as ferocious warriors, the MacGregors held their lands at Glenorchy, Glenlyon, Genstrae, Perth, Stirling, Argyll and Braevallich – now called Braeval — by right of the sword. Ruthless and lawless, their enemies were several.

In 1603, King James VI banished the MacGregor name and their existence. To enforce the edict, Lord Argyll – a bitter rival – was given a Royal Warrant to kill all MacGregors. To avoid annihilation, most changed their names and scattered across the Highlands or emigrated to Canada. The once powerful MacGregor clan became what Sir Walter Scott, in his 1817 novel, Rob Roy, called: “The children of the mist.” Some become Stewart, Graham and Drummond. Others adopted Campbell, Murray and MacCluskey.

One among those was Big Jock MacCluskey, a Scottish Highlander who came to Canada from his ancestral Braeval. A feared warrior who survived the Highlands’ hard scrabble life by a cunning wit, skilled sword and a swift gun, MacCluskey adapted to Canada, effortlessly. In a nod to the New World’s custom, he changed his name’s spelling to McCluskey and eventually settled in Connecticut’s Littchfield Hills. In between, he helped tame Montana and the Dakota territories, long before all won statehood in 1889.

A sometime lawman and bounty hunter, McCluskey survived by buffalo hunting, a livelihood earned by following the nomadic herds out of Canada down into Montana and the Dakotas. Realizing that bartering was more lucrative, McCluskey turned from hunter to Indian trader, a profession largely abandoned in the Great Sioux Wars that followed Custer’s defeat.

In the Indians’ eyes, McCluskey was no ordinary white man. Awed by his strength and size, he was hailed an invincible warrior. Both feared and revered, he was equally admired for his compassion. In the anti-Indian holocaust that followed Custer’s defeat, McCluskey was a rare white man who championed their cause. His reasons were simple: Their plight mirrored his own family clan’s descent from nobility to hunted criminals.

From the Sioux and Cheyenne, McCluskey bartered for buffalo pelts, offering a myriad of finished goods in exchange, the most coveted among the Indians were the heavy woven Scottish blankets from his native Braeval.

According to McCluskey’s great nephew, Gregor McCluskey, Sioux and Cheyenne warriors were in awe of its red. None had seen cloth in such a deep, rich red. They believed its intensely rich red to be a scorer’s hex, a dye distilled from the spirit blood and ghostly souls of McCluskey’s prey and enemies, a belief he did little to correct. Worn in battle, it was revered as a spirit guardian that would deliver them immortality, even in the face of death itself.

Because it was traded for buffalo hides, Sioux and Cheyenne warriors called it “buffalo plaid.” Likewise the U.S. Army fort traders who bought McCluskey’s bartered skins. Hence, sometime in the late-1880s, was born the American name: “Buffalo plaid.”

Today, the red and black check Big Jock McCluskey introduced to America is the symbol of BraeVal Sporting Apparel, a collection of rough and rugged, what  you wear out there sporting -themed apparel founded by Big Jock’s great nephew, Gregor McCluskey. A noted field trailer, falconer, marksman, sailor and globally itinerant sportsman who counts fly- and salt-water fishing, competitive skeet and clay shooting among his passions, McCluskey created BraeVal Sporting Apparel to fill a market void for a line-up of technically enhanced sportswear that married souped-up performance to haute fashion.

Named for his ancestral homeland, every BraeVal garment is a beauty and beast combo rolled into one, hi-performance chassis. All are colorfully accented with the Rob Roy MacGregor Tartan that has symbolized his family clan for more than 800-years.

Anchored by a collection of beefed-up tops McCluskey calls the “Range Rover of Shirts,” all tout visually dramatic colors interpreted in authentic Scottish checks, plaids and Tartans. Surprisingly, each color in McCluskey’s designs have a raison d’etre: Camouflage. Together, their variegated colors collectively mimic Mother Nature’s environs, a stealth-like shield that provided ancient Scottish hunters and warriors, alike, the deceit of camouflage. McCluskey’s designs have been granted  official status in the Scottish Registry of tartans of the National Records of Scotland.

The Black Explorer Magazine is on a mission to amplify the Black narrative in...