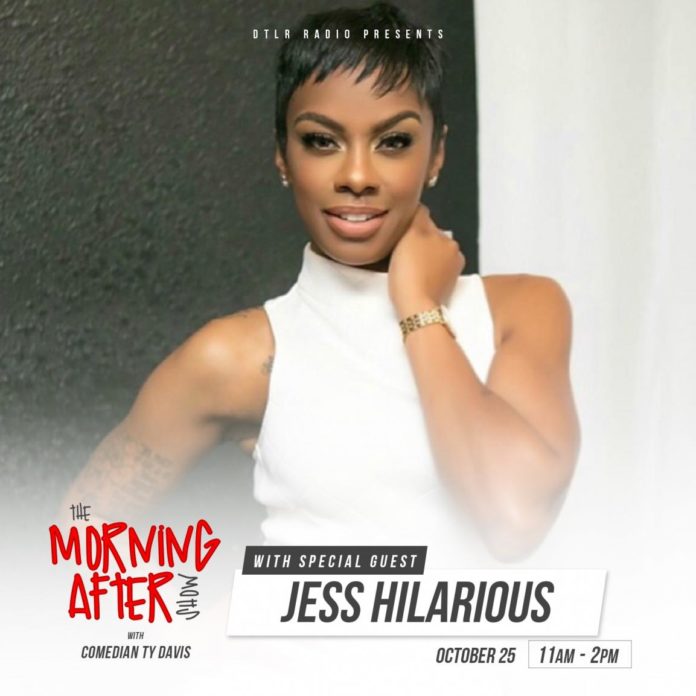 BALTIMORE – Oct. 25, 2017 – PRLog — Today, Comedian Jessica Moore–known to her fans as ‘Jess Hilarious’—responded in an exclusive interview with DTLR Radio Host Comedian Ty Davis about her current internet beef with another Baltimore-based comedian Tiana Douglass.  Douglas has accused Jess of stealing comedic material from herself as well as other big name comedians like Dave Chappel. Moore denies that she ‘stole’ any material stating, “I been free styling for two years,” said Jess, “follow suit.”

The argument started when Douglass posted side-by-side videos of Jess performing her standup routine next to videos of the comedian(s) that she is accused of stealing material from performing the same jokes almost word-for-word. This led to a viral Instagram post and several other comedians to weigh-in on the argument.

For her part, Douglas has said in an interview with another media outlet that, “This is my dream and I’m not going to let anyone steal it.”

Jess has a popular video entertainment news segment on Instagram called, Jess With The Mess, where she is no stranger to internet beef. Jess has caused quite a commotion with celebrities like Rapper Meek Mill, Singer Azela Banks, Comedian Cory Holcombe, recent LHHH cast member Hazel E and her boyfriend Rose Burgandy to name a few.

Tune into DTLR Radio on the web or via the app for the full interview with Jess Hilarious today at wfv 1pm (EDT).

Comedian Ty Davis is the host of The Mornin’ After Show heard on DTLR Radio’s LIVE broadcast every weekday from 11:00 am to 2:00pm (EDT) from the Puma Studios. The station and  her show can be heard in over 100 DTLR store locations in more than 15 markets as well as via  the DTLR Radio App and streaming on the world-wide web.

This Nola-based company will get you out of your rut — NolaAdore.com

This Nola-based company will get you out of your rut — NolaAdore.com