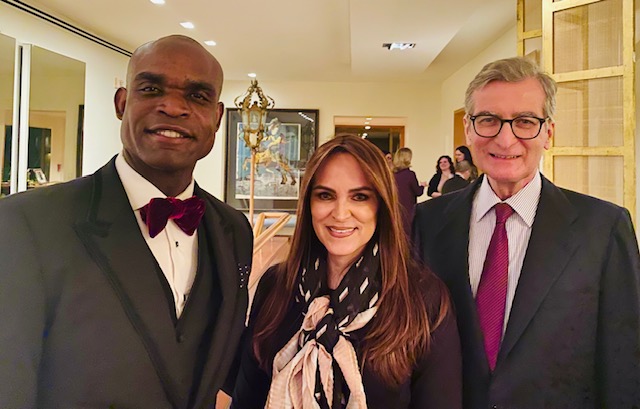 Serving in his position since September 2018, Cabanas studied law before joining the Spanish Foreign Service. Although he also completed law school, it was his attendance at the United World College of the Atlantic in Wales that inspired him to commit to exploring the international world.

“It is a true honor to have spent the evening with a man who has committed his entire life to ensuring healthy relationships both internationally and here in the DC area,” Dr. Lawrence said. “His support of the Latino Student Fund reinforces the belief that having a positive impact in the world starts right here in our own communities.”

The Latino Student Fund has served more than 4,000 students and their families within the Washington Metropolitan area since 1994. Its programs began as a scholarship fund to assist Hispanic students with the opportunity to attend private parochial schools by providing a small tuition stipend. Now, the LSF offers eight programs under three programmatic areas: post-secondary success, academic support, and family resources.

The organization’s mission is in direct alignment with that of LEAP Foundation DC, which is to “bridge the gap between hope and achievement.” Both Dr. Lawrence and Maria Fernanda Borja, president and CEO of LSF, have found the many opportunities to collaborate and support one another to be beneficial, allowing them to expand on their respective missions and create a much bigger impact on the community and the surrounding areas.

Dr. Lawrence has been named the recipient of the Latino Student Fund’s 2020 Philanthropic Excellence Award, which acknowledges individuals who have made the success of the organization possible. The award will be presented at the LSF Gala, set for Thursday, March 12, 2020.

The two organizations most recently partnered for the annual LEAP Foundation DC Toy Drive, through supporters adopt two Latino Student Fund families for the holidays. The families are invited to a holiday party, where the children receive gifts and enjoy the festivities.

“This is a favorite event, I believe, for both organizations and the families and supporters involved,” Dr. Lawrence said. “What better way to celebrate the success of the Latino Student Fund and LEAP Foundation DC than with a holiday celebration that brings us all together doing what we do best? We’d like to congratulate the Latino Student Fund for its impact on the community and for the treasured experiences that we have had working with them for the last several years.”

Driven by a mentality of servant leadership, Lawrence Executive Alliance of Professionals (LEAP), LLC, has been providing superior quality healthcare for active duty, veteran and civilian patients since 2007. Dr. Clayton Lawrence, a decorated and respected veteran of the United States Army, saw the need for a company that would operate with a new philosophy to bring forth excellence in the healthcare industry. Staffing medical facilities across the country with physicians, health educators, medical examiners and more, LEAP has been recognized with several awards of excellence and is certified by the Small Business Administration. Winning the Washington Business Journal Minority Business Leader Award for 2014 was just the beginning of much-deserved recognition for positive changes in the District of Columbia and across the nation. Dr. Lawrence and LEAP, LLC, were selected as the 2015 Washington, D.C., Chamber of Commerce’s Small Business Person of the Year. In 2016, Dr. Lawrence was honored when he was entered into The Congressional Record for his work in business and civic leadership throughout the greater Washington, D.C., region and abroad. Later that year, he received a White House Letter of Commendation from President Barack Obama for his work with LEAP, LLC.  LEAP, LLC’s nonprofit partner organization, LEAP Foundation DC, has been building bridges between hope and achievement in the District of Columbia and the surrounding communities since 2009. The group works to address the unmet social and health needs of the area’s people and, among other accolades, was recognized in 2014 with the Greater Washington Hispanic Chamber of Commerce Nonprofit Award. For more information, visit https://www.leap4staffing.com or https://www.leapfoundationdc.org.